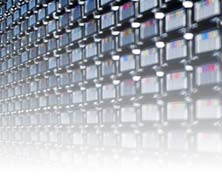 That works out to a 7400% increase in capacity.

LTO has been the standard in the tape industry since 2000. That’s 14 years of tape drives out there, which makes it very difficult for Sony to upset this industry even with the amazing 185TB capacity.

Most of the LTO tape drives sold are backward compatible with previous generations (LTO-6 offers two generations of backward compatibility) which offers an easy upgrade path that would not be possible with the new Sony format.
So, instead of the usual upgrade (say from LTO-4 to LTO-6), where the previous generation can be traded out and replaced with the new, the two would need to run side by side for some time which would be inconvenient and expensive.

This problem would be a non-issue if Sony were to share the tech with Ultrium tape manufacturers. Unfortunately, Sony has a long history of proprietary formats (UMD, MemoryStick, ATRAC, Minidisc, DAT and Betamax) and is not historically seen as one to share its formats.
However, with even sluggish giants like Microsoft starting to go open source and considering giving its OS away, history might not be the best predictor here.

Another concern would be write speed. The LTO-6 format maxes out at 1.4TB/hr with 2.5 compression. So, if the Sony 185TB version had the same speed, it would take about 132 hours to fill the tape assuming you could keep the 1.4TB/hr speed constant, which isn’t likely.

Pricing could be a hurdle since it would be difficult for this new technology to come in at similar costs to LTO at the Enterprise level.

This all sounds pretty negative, but really we love the idea. While it probably will not be a reality any time soon, news like this keeps tape in the storage discussion. It might also inspire IBM, Seagate and the rest of the LTO Consortium to either release similar tech that they might be working on, or increase the R&D budgets for LTO and that would be great news for the rest of us.
Sony’s 185TB Tapes – But So What?