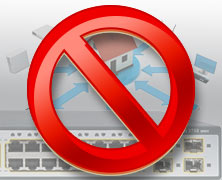 A friend of ours (and occasional customer) just worked out an internet upgrade at home to 500 Mbit.
That is fast enough to have made us all jealous here at work, and he wanted to really max out his home networking opportunities with a Cisco Catalyst 3750 Series switch.
The switch was available to him for pretty cheap from his workplace, and he asked us what we thought of the idea.

While we love ideas like this, we had to be the “shoot-downer” on this specific one.

One of our co-workers has the Cisco 3725 in his homelab and it works pretty well for this task as it is also a router, but it is not gigabit. The 3725 owner was also considering a change to the Mikrotik Router board line which we have heard good things about.