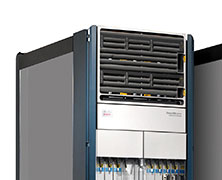 To help with that, Cisco is expanding their CRS router line with the CRS-X. The CRS line is made of core routers that are critical to the internet backbone and connect sites like Google and Netflix.

The CRS-X will offer speeds of 400 Gigabits per second for just one slot on one router’s rack. This is up from 40 Gbps on the CRS-1 and 140 Gbps on the CRS-3.
That scales out to a capacity of 12.8 Tbps in a single chassis.
Cluster 72 of these monsters together and you get up to 922 Tbps of throughput or almost a Petabit per second.

Cisco says that just one CRS-X rack could deliver streaming HD video to everyone in New York City at the same time. Cisco also thinks that routers like this are what are needed to get us to the Internet of Everything.