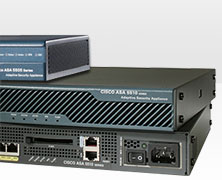 Which one is better?

As usual, it depends on what you need, but read on for our opinions.
Up front, we’ll mention that the 5505 is considerably less expensive than the 5510. Pricing is trending downward, so send a quick email for current pricing.
Cisco ASA 5505 vs Cisco ASA 5510 current pricing request.

More on the extra interfaces on the 5505:

The thinking behind the 5505 having more interfaces is that it is designed more as a branch office device. This will allow the extra switchports to function not only as a firewall and router, but also as a switch, making it more like an all-in-one device.
So, if your environment required a 5510 you would already have a separate switch and would not need the ASA to do the switching.

Do you have other differences or disagree with ours? Let us know in the comments at the bottom of this page.
Not sure what you need? Give us a quick call and we will help you decide which is best for you: 855-932-6627