HDD vs SSD Which Is Right For You 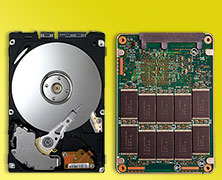 HDD vs SSD: Which Is Right For You?

SSD & HDD – What is the difference?

(Most readers of this blog will have an understanding on the difference between HDD and SSD, so this first section is a brief summary.)

A HDD or Hard Disk Drive is made up of rotating platters stacked on a spindle where bits of data are written in a magnetically sensitive coating. The data is written by read/write heads attached to an actuator arm that moves back and forth from the rim of the platter to the center of the platter.
A SSD or Solid State Drive is not really a “drive” at all as it has no moving parts (and the delays that accompany them). A SSD is flash memory which generally means semiconductor NAND memory and provides non-volatile rewritable memory.

Generally speaking, if your current system has a SATA connector it will support SSD storage. Firmware updates might be necessary, however.
For example, an older HP EVA 4000, while not specifically designed for SSD can accommodate it with a firmware upgrade[i]. Also, the IBM DS4800 line is not typically associated with SSD, but they will work.

The importance of pros and cons will vary depending on your application and budget, so these are generalities.
End-user situations with just a few storage devices might not be as concerned with the heat, noise and energy usage of 48 HDDs spinning at once, but a room full of whirring drives in a data center is another story. 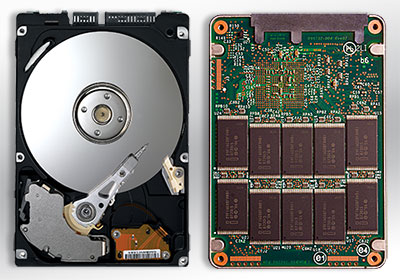 It sounds like a bit of a cop-out, but the bottom line really depends on the application.
The 60 year old technology of the HDD makes for inexpensive storage of large amounts of data. The mechanics of the HDD (rotating platters, read/write heads on the moving arm) make for heat, noise, and comparatively low data access speeds. However the price is great.
The more recent technology of the SSD means excellent speed, silent operation and low energy usage. The price is steeper, but the gap between the two technologies is closing. Just a couple years ago, the average difference in price was 7-8 times more for an SSD over an HDD. Now it is possible to find SSDs for twice the price per GB for a comparative HDD.

We think (and this depends on your hardware) that if you are upgrading older gear, then the trusty HDD will suit most applications.
If you are looking to upgrade to newer hardware (e.g.  IBM Storwize V7000, IBM DS8000, HP 3Par, Dell Compellent, EMC VNX, EMC VMAX, and NetApp FAS series) or need to add new storage, then the SSD deserves a very close look.

Not sure?
Maximum Midrange offers free consulting on your storage needs and we can offer multiple SSD or HDD storage scenarios to fit your application and budget.
We can give you the data so you can make an informed decision.

HDD vs SSD Which Is Right For You And Your Business